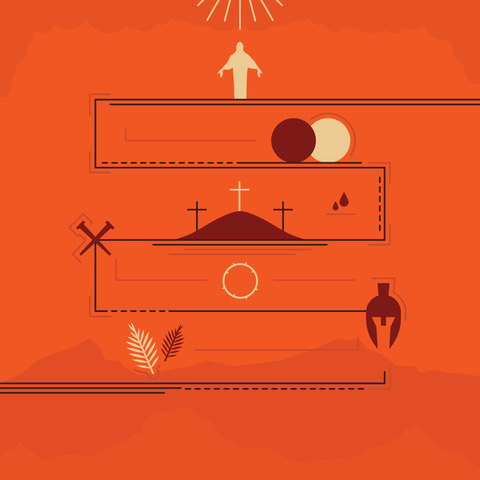 The most influential name in history: Jesus Christ. In 2013, the name was googled over 24million times per month. As of today, this name is googled more in Africa than anywhere in the West. So what is it about this name that inspires a greater response than any other name, modern or historical?

At the name of Jesus, people worship and curse. Globally speaking, more people claim allegiance to this person who was killed roughly two thousand years ago, than any modern political or cultural leader. No name is claimed to have brought greater peace, and neither has any other name brought greater anxiety. There is something about Jesus that crumbles our pride and self-sufficiency. If the claims of Jesus are true, then our future is on the line.

Ultimately, every person must come to terms with the name of Jesus. Will he be worshipped or ignored? Of all that can be said about Jesus being gentle and compassionate, the one action he never tolerated was when people defined his identity for him. Jesus came with a specific purpose, not a grab bag of new-age possibilities. For every person, their response to Jesus comes through the meaning of his name and his or her response to it.

Jesus’ Trial Is About His Identity

Jesus’ controversial life can be boiled down to a moment. At the climax of his ministry, Jesus was betrayed and brought before Pilate and the Jewish religious leaders. At the trial, his identity would be weighed and humans would determine the remainder of his earthly life.

Now at the feast the governor was accustomed to release for the crowd any one prisoner whom they wanted. And they had then a notorious prisoner called Barabbas. So when they had gathered, Pilate said to them, “Whom do you want me to release for you: Barabbas, or Jesus who is called Christ?” For he knew that it was out of envy that they had delivered him up. Besides, while he was sitting on the judgment seat, his wife sent word to him, “Have nothing to do with that righteous man, for I have suffered much because of him today in a dream.” Now the chief priests and the elders persuaded the crowd to ask for Barabbas and destroy Jesus. The governor again said to them, “Which of the two do you want me to release for you?” And they said, “Barabbas.” Pilate said to them, “Then what shall I do with Jesus who is called Christ?” They all said, “Let him be crucified!” And he said, “Why? What evil has he done?” But they shouted all the more, “Let him be crucified!” Matthew 27:15-23 ESV

At this documented moment in history, the spectators were given a choice: whom would they release: Barabbas–the violent revolutionary, or Jesus–this man claiming kingship? His fate would lie in his name.

The name Jesus means Yahweh, the God of Israel, saves. Israel as a nation illustrates the prideful inconsistencies of the human heart. This nation was saved out of Egypt, only to wander back into countless domination under Assyria, Babylon, and eventually Rome. Jesus’ name reveals a line to the biblical Joshua, who would lead a stubborn people out of suffering into the land of promised peace. In the past, the Israelites followed these leaders, only to return once again to the sin that held them hostage. But where are they now, and whom must they follow?

Far from a last name, Christ means “Chosen One,” the title given to the person destined to lead God’s people to back to him. This Jesus would be crucified as the Jewish King his own people rejected. But now, he is worshipped by people across nations, languages, and cultures. Ultimately, Jesus trial is not about his Jewish kingship, but his cosmic reign.

To respond to this, we must all come to terms with the facts about Jesus and the claims of Jesus.

The facts are this: Even though there are thousands of years of documented history before and after him, Jesus is the most influential person that has ever lived. It is a historical fact that he lived a life of ministry, was crucified as a criminal, and would be proclaimed by thousands immediately after his birth that he had been resurrected to glory. Since that first century, his name has continued to multiply worshippers throughout the earth.

The claim is this: Jesus, exclusively, is the person appointed by God to bring restoration to his people.

The difficulty with these claims is that if they are true, everything hinges on them. The very name that calmed the storm is also the name that brings out rage in unbelieving hearts. If Jesus’ identity is true, then it changes us and everything. To conclude to this intensity, I quote a lengthy exhortation to young men by J. C. Ryle.:

“Young man, I set before you Jesus Christ this day, as the treasury of your souls; and I invite you to begin by going to Him, if you would so run as to obtain. Let this be your first step, –go to Christ. Do you want to consult friends? –He is the best friend: “a friend that sticks closer than a brother” (Pro. 18:24). Do you feel unworthy because of your sins? Fear not: His blood cleanses from all sin. He says, “Though your sins are like scarlet, they shall be as white as snow: though they are red like crimson, they shall be as wool” (Isa. 1:18). Do you feel weak, unable to follow Him? Fear not: He will give you power to become sons of God. He will give you the Holy Spirit to dwell in you, and seal you for His own; a new heart He will give you, and a new spirit He will put in you. Are you troubled or beset with peculiar infirmities? Fear not: there is no evil spirit that Jesus cannot cast out, there is no disease that He cannot heal. Do you feel doubts and fears? Cast them aside: “Come unto Me,” He says; “him that comes I will by no means cast out” (Jn. 6:37). He knows your trials and your temptations, your difficulties and your foes. In the days of His flesh He was like yourself, a young man at Nazareth. He knows by experience a young man’s mind. He can be touched with the feeling of your infirmities, for He suffered Himself, being tempted. Surely, you will be without excuse if you turn away from such a Savior and Friend as this.”

May God give us all the grace to ponder and respond to this reality with sincerity and joy.

There are no upcoming events.